Editor’s Note: The International Collegiate Agricultural Leadership (I-CAL) program travels overseas to learn about global agriculture and international marketing. The group of 12 Collegiate FFA members departed the U.S. on May 20 for a 10-day tour of Japan where they engaged U.S. Embassy officials and government leaders; toured feed mills, animal markets, small farms and livestock operations; and toured food processing plants, among other activities. ICAL 2014 is made possible through support from The Grains Foundation.

Today we had the opportunity to sight-see around Tokyo and learn more about their cultural heritage. Japan’s culture is very unique and rich in history. We started the day off by walking from the hotel to the Emperor’s Palace which was in the center of Tokyo. The Palace was extremely beautiful surrounded by trees and colorful gardens. We walked to the hill located on the palace grounds which gave us a scenic view of Tokyo. It was exciting to be able to see an overview of the city and its many sights.

We then traveled back to the hotel and met up with Tommy for an exciting day of traveling around Tokyo and learning more about agriculture. Tommy took us to the open street market, known for the high quality fish, fruits and vegetables all available for sale. Typically the products purchased at the market are for restaurants or cafés. Early in the morning a live fish auction happens for customers to purchase some of the best fish available. We were able to look through some small shops and purchase traditional dishes and tableware with unique Japanese artwork.

After the markets we then walked through the famous Japanese park, Hama-rikyu Gardens. The garden was absolutely beautiful, full of flowers and trees that are traditional to Japan’s culture. We were even able to see a bride and groom taking wedding photos in the gardens.

We finished off our sightseeing for the day by window shopping on the famous Ginza Street. Ginza Street is equivalent to 5th Avenue in New York City, full of high end stores. It was a lot of fun to be able to walk on Ginza Street and soak in the beautiful buildings and stores. We concluded the day by traveling back to the hotel and getting on a bullet train to begin our next adventures in Kyoto. The bullet train ride was extremely fast and we were able to see more rural scenery of Japan. Some of us were even lucky enough to see Mt. Fuji shortly after we departed Tokyo. It was an exciting and adventurous day to learn more about the tradition and culture of Japan which is still so important to the country today.

Today (Sunday) was day of sightseeing around Kyoto.

Tommy was again our tour guide and showed us many neat sights and historical things all around the city. The first site we saw was a Buddhist temple called Sanjusangen‐do. To enter this temple we had to remove our shoes because it is a Japanese custom to remove your shoes when entering most historical or religious sites, houses, or restaurants. This temple had 1,000 deity statues of the Kannon, which is a rank in the Buddhist system. There were also 28 Gods that represented an element such as wind, rain, thunder, fire, etc. The most important statue in the temple was of Buddha who had many arms to represent that he is involved in many things in the lives of those who worship him.

After we walked through the temple we were able to walk around the gardens and grounds outside the temple. We participated in a cleansing ritual where you wash your hands and rinse your mouth. There were lots of school kids on a visit there and a couple groups approached us to practice their English, swap currencies, and take pictures with us.

Next Tommy took us to a Shinto temple that was on top of a large hill. It was quite the hike! The view was extremely gorgeous so in the end it was all worth it. While at the temple many of us tried our luck and bought Japanese fortunes and charms. At this temple, we happened to see many people in traditional dress called Kimono. Many of us took pictures with them.

On our way to lunch after the Shinto temple we decided to test our skills and try to take a typical tourist “jumping” picture. Many people stood and watched as we tried to take it and eventually a group of tourists watching us asked if they could jump with us. After we “successfully” took a couple pictures, we walked through a very crowded shopping area to find a place for lunch. We ended up going to what seemed like a very traditional place where we had the option of hamburg steak or a curry dish. We once again had to remove our shoes at this establishment as a sign of respect to their customs; they were kind enough to provide us with shoes when entering the bathroom.

The last religious site we saw was another Shinto temple with beautiful garden grounds. At this temple a few of us got to witness the end of a traditional Japanese wedding that had taken place at the temple. The bride wore a traditional long white kimono and the groom wore a greyish-black one.

The final site we saw was an indoor Japanese market. There were all sorts of things for sale such as clothing, souvenirs, fish, fresh produce and much more. It was extremely crowded and busy, but very neat to experience. It was a long day but well worth it! Kyoto has been an interesting city and much different from the hustle and bustle of Tokyo. We have been experience a different part of the culture as well as seeing new sites, architecture styles, and agriculture. We are looking forward to see what the rest of Japan has in store for us. 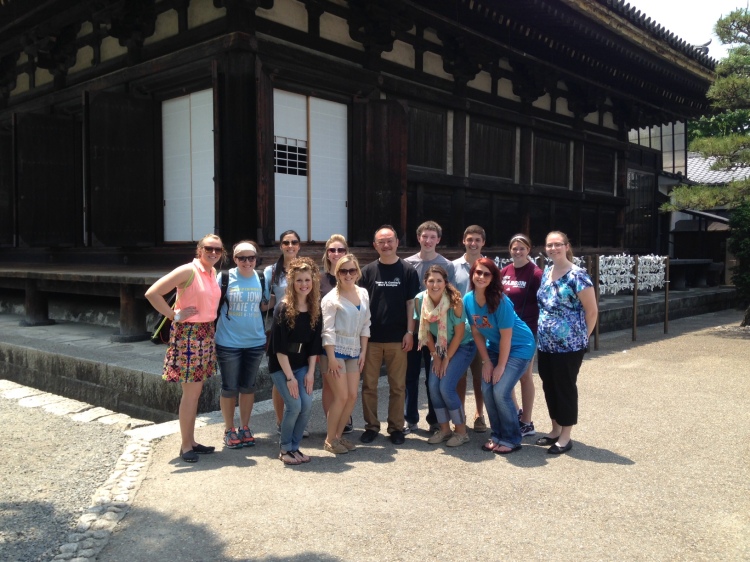 Today we found a little piece of heaven on Earth in Japan.

We took a bus to Yuge Farm to tour their dairy farm, cheese processing factory and confectionary baking factory. This family farm operation is run by Tadao Yuge and Kazuko Yuge, who have three children that plan on continuing their farm operations in the future. Tadao’s father incorporated in the farm in 1943 and he continued the operation in 1970 after studying abroad in Wisconsin and UC Davis to learn about the United State’s dairy practices. He started selling milk and cheese in 1988 and they also have a restaurant where they grow the majority of food served. Yuge Farm consists of 17 acres where they currently have 60 heads of dairy cows and several different kinds of vegetables and herbs in their beautiful garden. They also harvest shiitake mushrooms and have honey bees.

Even though their dairy is very small compared to many in the U.S., their technology is very efficient with automatic milking machines. Each cow has a “milking necklace” where the machine can detect if the cow is ready to be milked or not, as well as detecting any viruses and diseases. The cows are grass fed and grain fed with precise daily measurements of grain intake. The average cow produces 55 lbs of milk per day.

After the tour, the Yuge family graciously catered a delicious meal at their restaurant. The entire I-CAL team can agree that this was one of the best meals in Japan so far. Even though we just had a bagel sandwich, cheese with bread, a dessert cheese with raspberry jam, and a cheese sponge cake, words cannot describe how amazing this meal was (not to mention the fresh milk and cafe au lait that could put Starbucks out of business). What an experience, all while being surrounded by one of the most peaceful and beautiful dairy farms.

After our visit to the Yuge farm, we visited a very sophisticated tomato growing operation. The Nakaue farm, located in Hyogo, was a family operation with over 12,000 tomato plants all growing in greenhouses. This was a major highlight for all of us because we were able to compare their operation to tomato operations back in the U.S. The Nakaue farm only grew one variety of tomato, the peach boy, and the specific variety grew over six feet tall and the width of the vines grew up to an inch and a half.

After touring the greenhouses, we were fortunate enough to try one of their tomatoes. Talk about heaven on earth — we all agreed that we had never had a tomato that tasted so fresh and juicy. After our sample, a few of us got the chance to talk with a reporter from a local newspaper that had followed us to the farm.