What if you could click your red boots three times and rewind back to that night? Where a bad boy cowboy roped you in then waltzed right out of your life? For many of us there are moments in time we would love to go back to, even if just for a few minutes. This fantasy is written out in HunterGirl’s new single, “We’re Not in Kansas Anymore.” It only took a car ride back to Nashville from Kansas to write out the magic she experienced that weekend at the Country Stampede. Three minutes and 32 seconds is all it takes to tell a story that so many of us can relate to and daydream about in our own car ride.

The journey to Music City has not been as easy as following a yellow brick road for HunterGirl. She has taken the help of every friend she meets along her journey and puts in the hard work to overcome any twister that blows her way. Read on to learn how her music writing started as a young girl and how learning the music business on Broadway has made Nashville feel just like home… 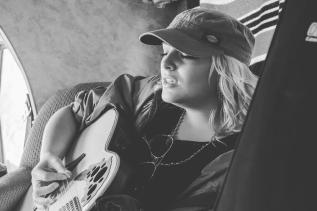 When country music first entered Hunter’s life she remembers back to the age of three visiting with her grandparents. “I lived five minutes from my grandparents growing up, I was always at their house listening to Johnny Cash, Keith Whitley, and Dolly Parton mostly, recalls Hunter, “I started singing when I was about three in my grandfather’s church.”

Growing up in Tennessee, Hunter quickly took to Dolly’s inspiration in writing her own songs by age nine and traveling with a band by age 14. “I started playing guitar when I was 15, that’s when song writing took off for me because now I could play what I was hearing in my head. I started playing at writer’s rounds and where they would let me in while I was in high school,” says Hunter.

A few years later she took the road to Nashville and started school at Middle Tennessee State University (MTSU) “I’m going to school for music business right now in marketing. I came up here to be closer to the Nashville scene and learn the ropes. I’ve learned more about song writing in the past two years than I ever have,” says Hunter, “When you’re surrounded by people who love the same things you do and have the same goals it’s so different. In Nashville I get to be with people just as crazy as I am about being here and loving music.”

Hunter knows behind any successful artist is a good business plan. “I’m learning how to become a better singer and songwriter, but I need to be able to promote myself to book gigs and go about in the music industry. MTSU has done a lot for me because it’s given me access to people who have done what I want to do and all my teachers are people in the industry,” says Hunter. 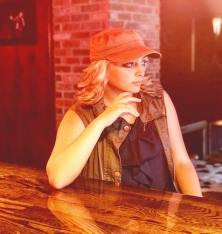 After an open mic night at The Bluebird Café, Hunter was approached by the host who invited her to a publisher workshop to learn how writer’s pitcher their songs. “She said I could go for free if I help clean up and drive people there. Anybody that’s willing to teach me about something I know nothing about, I run after it,” says Hunter, “I’m not afraid to do the work in order to get something out of it. I think if you’re good to people then people are good to you.”

What Dolly Would Do…

With her songwriting growing each day, Hunter still thinks about what Dolly would do. “I grew up listening to Dolly Parton a whole lot, that’s all my Nana would listen to. She is an amazing songwriter and her business; she has conquered every aspect of the industry. I want to follow in her footsteps there, learning to do everything. She’s someone I look up to in every possible way.”

Hunter also looks up to the songwriting of Luke Laird and Shane McAnally. “Luke went to MTSU and is another reason I chose to go. I was about 15 and my dad took me to a writer’s round. I never knew artists didn’t write their own songs. These writer’s were playing all these songs I knew; they are the storytellers. I would love to be up there doing that,” says Hunter.

We’re Not In Kansas Anymore…

Now with her own musical style Hunter is releasing her EP (extended play record) with its first single “We’re Not In Kansas Anymore” based on her real life. “I was in a song-writing contest and got to play at the Country Stampede in Manhattan, Kansas. While I was there I had a crush on one of my friends, but I knew it would never work with him because he was older than me. He taught me how to two-step and I thought it was so sweet. We were good friends and I didn’t want to mess that up so when the weekend ended I was depressed because it was an awesome weekend getting to play music out there with my friends,” tells Hunter.

During the car ride back to Tennessee Hunter was looking out the window just as they were about to enter Missouri. “I pulled up Snapchat and when we crossed the Missouri line I yelled, ‘We’re not in Kansas anymore!‘ Like from the Wizard of Oz. I sat there and started writing the song about how things were different in Kansas, all awesome and great, but when we go back everything is going to go back to the same. I wrote this song in the car and by the time we made it back to Tennessee I finished it. I played it at a writer’s round the next day, I was so nervous. I kept playing it at shows and telling the story behind it.”

Not long after writing the song, Hunter received an email from Spotify about a contest opportunity to do a feature story with MTSU Alumni Mitchell Tenpenny about how MTSU has made him the songwriter he is now. Hunter made a video telling the story behind her song and the director chose her for the feature.

“Everyone was nice and the Spotify team was so good to me. Mitchell came in and we just talked. I asked him questions about where he got where he’s at, and what I need to do. He told me to keep doing what I was doing and meet as many people as you can. MTSU taught him how to market himself and how to be a better songwriter,” says Hunter, “His song (‘Drunk Me’) just hit number one and it was surreal being in the room with someone that successful who had been where I’m at. He told me to keep the faith and keep moving. Working hard is the biggest part, meet as many people as you can and fight for it.”

Hunter is still learning and growing in her music career, but she encourages other aspiring artists to always be willing to work hard. “It’s important to be talented and a good songwriter, but if you don’t work hard it’s almost impossible. My mom taught me growing up, be nice to everyone and if you want something work really hard and you can do anything. I believe that to be true, I work 24/7 just trying to get closer. Weather it’s an inch, a foot or a mile; it’s closer that I was yesterday. Have faith in yourself that you can do this and nothing is impossible if you work hard and are nice to everyone. Talent is important, but it also matters how you treat people,” says Hunter.

God, Your Mama and Me…

She gives credit to her Mama, family and faith for making her the humble artist she is today. “My Mama and family have always been super supportive of me. They drove me everywhere and have been to every gig. They help me come down from everything. The Lord helps me; my Pa is a preacher so I grew up in church. I pray about things and how to be better at supporting my friends when they are having success even when I’m not.”

“My friends and my family are my team, so you have to lift each other up when one of us isn’t doing as great. I’ll always be there for other people that have been there for me. They have your back and it’s a great feeling when you are down and out and don’t know what to do. You can go to you family, friends and the Lord to lift you up. Then I’ll pick up my guitar and write. I love music and I want to do this. I have to keep working hard and hope for the best,” says Hunter.

With plans for a big year of writing, Hunter wants to focus on her music. “This year is about me becoming a better version of myself and working hard to get the EP out there and connect with more fans. Writing more songs and meeting as many people as I can helps more than anything.”

To connect with HunterGirl visit huntergirlsmusic.com and follow her on social media and listen to her new single “We’re Not In Kansas Anymore”:

There was an error retrieving images from Instagram. An attempt will be remade in a few minutes.