I had been looking forward to last Saturday night for sometime. My boyfriend and I were planning to see the Josh Abbott Band in Indianapolis at 8 Second Saloon. I had never been there before and the show had been rescheduled from March. The Journalist in me was excited about the possibility of meeting Josh Abbott.  I had first been introduced to his music by my Texas friend Brittany. Then I came to know a West Texas farmer, Jeremy, who went to collage with Josh through the Face of Farming and Ranching contest. I have spent many hours listening to their music in the barn. It instantly makes me sing and takes me to another place. Most often that place is my love for Texas, farming and my boyfriend.

Before the concert we went to eat at a local restaurant called Grindstone Charlie’s. Little did we know, it was right by the saloon and the recommended place for the bands to eat at before their show. We sat in the waiting area for a few minutes then in walked three men. They asked the waitress how long the wait was and she said thirty minutes. They instantly said no and walked out. It was so quick, but my heart sank because I thought, was that Josh Abbott?! Ryan told me to go after them but they already made it around the corner and were walking down the street. I didn’t want to seem like a crazy fan girl by chasing after them. To say I was majorly bummed would be an understatement. I hesitated and missed my opportunity to talk to Josh! 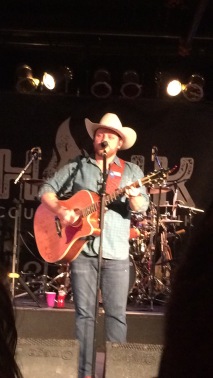 Later at the concert we confirmed it was him at the restaurant. I saw him by the stage listening to his opening act and pointed out my “We can blame it on the wine” t-shirt. He smiled at me, but that was the extent of our connection. I was so mad at myself for not talking to him at the restaurant. As the night went on, despite the drunken college age people bumping into me, I came to realize I am still blessed to be here enjoying the night with Ryan. I am so thankful he came with me.

I got to thinking how high we put musicians. Most fans would do anything to say we met them and get a photo or autograph. While all that is nice, what comes down to it is the story from any experience. While I wish I was sharing a Josh Abbott band interview right now, I am still happy to share this message of appreciating the people you have in your life. At the end of the night all that mattered was who I had with me at the concert. Someone who cares about me and I love.

I will continue to listen to Josh Abbott in the barn and day dream of the love I have in my life. I am thankful for a wonderful weekend and my man. Remember to always go after your dreams, take chances and opportunities, but realize your blessings when things don’t go like you wished they had. Dolly says it best, “What good is wealth and fame, fine clothes and diamond rings. It just don’t mean a thing if you ain’t got love.”