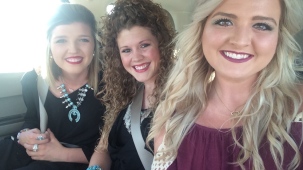 Driving through the Oklahoma plains in the back seat listening to the harmonic sounds of Walker McGuire just felt right that fall. Throwback to when I visited my friends attending Oklahoma State University in the fall of 2016. I fell in love with the raw unique sounds of the country duo. Walker McGuire had a sound of their own with song lyrics to make any newly single girl’s heart throb with songs like Till Tomorrow. Now as a newly engaged girl, they still make my heart throb with songs like Mysteries of the World.

This is why I couldn’t have been more excited to hear they were making their way to the heart of the Midwest to perform in Lima, OH right before my 29th birthday. I couldn’t think of a better way to celebrate than rocking out to their music with $2 beers at UNOH Event Center. I was so excited to get up close with a small crowd. Walker McGuire took time to tell the stories behind their songs and hit songs they have written for major recording artists like Luke Combs. I even got the chance to meet them and tell about my interview with 90 Proof Twang as they are co-writers in the single Bench Seat. Read on to hear the story behind the music…

“Within six months we had a publishing deal. I could stop waiting tables and he could stop selling software. It was a blessing. When we got our first deal, we went down to Mexico to write some songs. For any of you that have been down to Mexico, you know there can be some distractions down there. With the tequila, food and the women. This song was written on an airlines napkin on our way back from Mexico about a girl we met. We shot a music video in Key West a couple years ago. We weren’t going to put it on our record, and then our label said that song is going on your record because it reminds everyone of their first trip to Mexico.”

“You guys ever heard of Old Dominion? Those guys write a lot of different songs for artists in Nashville. They write killer songs. They wrote a song a couple years ago called I’m On It. We heard it, called them and said, ‘Would you mind if we take this song, record it and make it a Walker McGuire song?’ At first they said no because they were going to put it on their next record. We decided to send them a cure-all to change their mind, whiskey. Whiskey fixes everything! This is one of our new songs.”

“Were any of you embarrassed by your first car? I’m lucky I had one, but probably shouldn’t have had one at all. We were song writing and I said I probably would have picked up more girls if I had a pick up truck in high school or a better car.”

“Johnny grew up in Kansas City, when he was young a girl moved to town from California. We were drinking beer one night while writing and Johnny told me about this girl. We thought we have to write a song about this girl, her name was Holly. This song will be on the second record and if you know it, you’ve been listening to us for awhile.”

“I (Jordan Walker) was at a bar and a guy came up to me in a Carhart jacket, ball cap and a big red beard. He said his name was Luke and he just moved here (Nashville) from North Carolina and I want to write songs. He said he knew I was in a band Walker McGuire and he would love to write a song with me someday. I said, ‘Luke I got a plan. Since these beers are $4.25 a piece and I got a 12 pack at my house and drink my roommate’s beer’, since he had a little bit of money and I had zero dollars at the time.”

“I said, why don’t we write a song about your ex-girlfriend and her mom. He asked how we would phrase it? I said I think we call her mom you ex-future mother in law. He loved that idea… As of last year on my birthday this was the number one song in the country for two weeks in a row. This song changed my life and bought me a lot of stuff I don’t need. This is my first ever number one song, called When It Rains It Pours.”

Click on each song below to learn the story behind the songs! 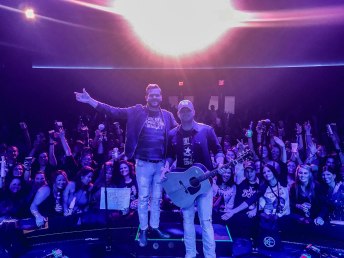 Mysteries of the World

It was awesome to meet the guys and I can’t wait to see their show again with all the stories behind their music!