When you want to make a dream reality, there are no excuses you just have to do it. It can be hard to make the call, pack up the car and move. It can be hard going to the gig and singing to a room of strangers. You wonder what they will think, how will they respond and will it make a difference? When I talked to Warren Garrett on the phone, I didn’t have to be in Nashville to understand that a music career isn’t easy. You have to eat, sleep and breathe music. There are no excuses and the reward will be worth the rough road to success. Success doesn’t always come in wealth and fame, it comes in the connection you share with someone when they hear your song for the first time. Read on to learn how Warren got his start in music, made the decision to move to Nashville more than once and his new single Girls Get Wings…

Q. How did you find your love and talent for music and decided to make it a career aspiration? 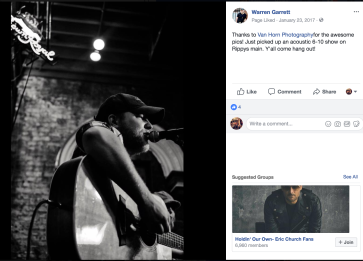 A. “I grew up in upstate South Carolina and started playing music when I was eight. I tell people all the time how my dad and I joke when he says, ‘Son, I want you to play something,’ and the only thing I could think of to play is a mandolin. So I played the mandolin with my dad for a long time, until I was 13 and started playing guitar. My dad taught me how to play on his old guitar. We would write songs together, go out and play with old timers around town. We played old bluegrass and gospel.”

Q. How would you describe your musical influences and style?

A. “Playing with my dad, I grew up listening to everything from old school rock bands like Led Zeppelin to old school country like Hank Jr., George Jones, Waylon and Willie. I would play in church, playing guitar for youth group band. I always loved music in any fashion. When I lived in South Carolina I would help people record and play guitar for people. I sang a little bit, but I didn’t start pursing artistry until I moved to Nashville. I really came into my own in Nashville, figuring out what my artistry would look like. My style is a little more edgy. It’s old country mixed with a little rock and roll.”

“It was now or never, so I did… I slept on a hotel floor the first couple nights in Nashville… and just made it work.”

Q. How did you make the decision to move to Nashville?

A. “I knew I wanted to move to Nashville since I was little. I told my parents I want to do music. So the decision to move to Nashville was something I always wanted to do, but it happened on a whim. Two guys I knew from the musical circuit back home called one day and said, ‘We’re biting the bullet, we’re moving to Nashville.” It was in like two weeks, but it was now or never, so I did. We didn’t know what we were going to do, where we were going to live. I slept on a hotel floor the first couple nights in Nashville. I looked for jobs on Craigslist and just made it work.” 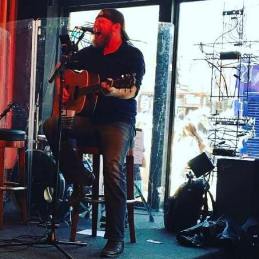 Q. How did you start meeting other songwriters and the people you are working with now?

A. “I’ve been in and out of Nashville going on four years now. When I first got here, I started working downtown. I was a bouncer for one of the clubs on Broadway. I asked the booking guy at the club I was working at how I could start playing? He told me to play a couple songs then he asked for me to play a couple more, then he hired me on the spot to do music instead of security. I’ve been playing for him ever since and that’s how I met a lot of my friends I still have today.”

“You can do anything with a melody or lyric and watching that creative process happen with people in collaboration is so cool.”

Q. What do you enjoy or look forward to most about writing, recording or performing music?

A. “I moved back to town (Nashville) to be a songwriter, that was my goal. I started going to the writers rounds. You find your place and the people you like to write with. One of my favorite things about music is the creative process with endless possibility. I imagine it’s how an artist feels looking at a canvas. You can do anything with a melody or lyric and watching that creative process happen with people in collaboration is so cool. Everyone has a different process, but it comes together to get something you’re all proud of.”

“There is curiosity when you take something you and your friends created that you like for whatever reason, but seeing how a crowd responds or connects to it is a reward. My passion has always been connecting with a crowd by communicating with song and watching how people respond to music.”

Q. What is a memorable experience for you in your music career and how has it impacted you?

A. “There are many that come to mind, from writers rounds and watching a crowd connect with a song they’ve never heard before, to shows I get to play on a daily basis. When someone I’ve never met before responds to something I did on stage because it connected or spoke to them, I think it’s the most incredible thing you can do in music.”

There Are No Excuses

“Music is a constant thing, it’s not a job and it’s a lifestyle… If you really want to do it, you can do it. You don’t have an excuse.” 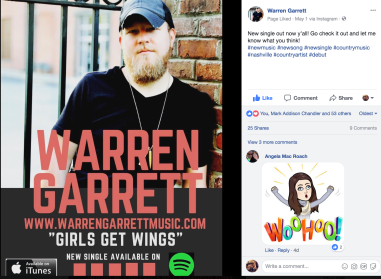 Q. What advice would you give to someone who may have a dream in music, but is struggling with taking the steps to make it a reality?

A. “Nobody has any idea what they are doing! You just have to do it if it’s really something you’re passionate about. Like I said, all my friends and I eat, sleep and breathe music. We love it and it’s what we feel like we were created to do. Music is a constant thing, it’s not a job and it’s a lifestyle. When I first moved to Nashville I slept on a hotel room floor then the second time I crashed with a buddy and slept on an apartment floor. If you really want to do it, you can do it. You don’t have an excuse.”

Q. How do you guys sleep? I would have song lyrics in my head all night!

A. (Laughter) I get those calls at 2 a.m. from someone saying, ‘Dude, listen to this!” My friends and I make fun of each other all the time because we eat, sleep and breath music. I’ll have a conversation and somebody will say, ‘That’s a great line for a song.’ I’m learning from the really talented people I’m lucky to be surrounded by.”

Get Around People Doing What You Want To Do

“All my friends and I eat, sleep and breathe music… I’m learning from the really talented people I’m lucky to be surrounded by.”

Q. What is your latest project and what does it mean to you?

A. “I’m going into the studio tomorrow and I’m so excited to record my first single Girls Get Wings. I’m going to be in a competition in North and South Carolina to get radio play down there. Listeners can vote for which song they like and I’m excited to see how people respond to me as an artist and the song. It’s a big step into moving forward as an artist.”

Listen to Warren’s new single Girls Get Wings on iTunes and Spotify now!

Buy Girls Get Wings on iTunes

Visit Warren on Social Media to hear his music and follow his journey in Music City!