For the first time I folded my hands, bowed my head and said a small prayer over writing a story. When a simple Arkansas country boy made his way to Nashville at 19 years old he did not know a soul in town and did not know what was in store for the years ahead. From dark times found in the bottom of a whiskey bottle to a Hallelujah High in church Sunday morning, Jarrett Hartness tells his story of truth and faith.

And the Lord Answered me: “Write the vision; make it plan on tablets, so he may run who reads it.” Habakkuk 2:2 ESV 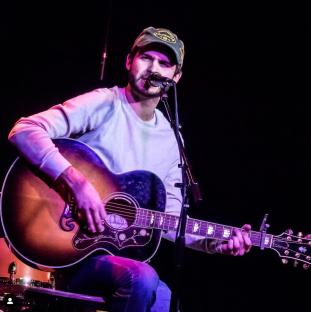 Writing his thoughts on paper at the age of 12 gave Jarrett a love for music. “Going through my parents divorce is when I found my love for writing and music. Guitar was the avenue to get the lyrics out,” says Jarrett, “I don’t think I would have picked up a guitar if I didn’t have those thoughts I was writing. I was hooked, the first time I strum a chord and it sounds like a song.”

Jarrett found himself daydreaming of moving to Nashville during class, it was all he ever wanted. “I knew that was the place where things could happen musically. I did one semester of college and knew it wasn’t for me. I was young to move to Nashville, but thankful I did. If I hadn’t moved then I wouldn’t have the friend group I have, like Josh Gallagher. We met my first week in town and he’s been like a brother to me ever since.” tells Jarrett.

With a new friend in town he continued to find opportunities to play music and meet new people. “The first couple years in Nashville were a handshake game. It still is, but now I have a group I call my Nashville family. If you hear somebody you’d love to write with, you go up and introduce yourself,” says Jarrett.

For I know the plans I have for you, declares the Lord, plans for welfare and not for evil, to give you a future and a hope. Jeremiah 29:11 ESV 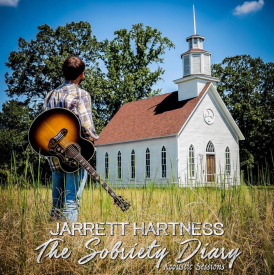 With a love for the real life and truth in country music, Jarrett’s inspiration stems from the traditional sounds of Waylon Jennings and to this day Eric Church. “Always those rougher guys that spoke to the blue-collar crowd, the heart beat of America type people. The ones working 50 to 60 hours a week, like the farmers,” says Jarrett.

Over the past couple years, contemporary Christian music has become an influence in Jarrett’s music. “I was raised on Southern Gospel as well. I love Americana, the storyteller songwriters. The Sobriety Diary album is finger picking on the guitar and just laying it out there.”

Jarrett’s album The Sobriety Diary, is comprised of nine songs, telling his journey from dependency to freedom over the course of a year.

Out of my distress I called on the Lord; the Lord answered me and set me free. Psalm 118:5 ESV 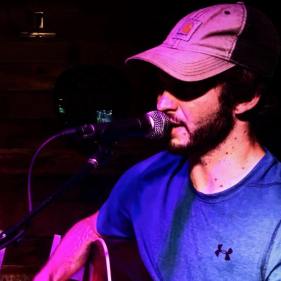 Jarrett tells of his times as a heavy drinker, putting his faith on the rocks and his music on hold. “My life was in shambles and my relationship with Christ was not where it needed to be. I wasn’t really living, I was just floating around. I wasn’t writing music, I thought I lost it,” tells Jarrett.

He later found the only meeting he needed to gain control in his life was with Christ and his answers to healing could be found in His word. “I didn’t go to rehab or AA. I just bought a home, so during the detox times it was just me in that house. All I had to lean on was God, it was a way of getting my life back right,” says Jarrett.

The Sobriety Diary songs came from those times and his first year of sobriety. “I’m not a great singer, but there is such conviction I hope people get the feeling out of it. They feel the pain or the joy if it’s ‘Hallelujah High’. I didn’t want a full band because of that, it’s a story between me, God and my guitar of where I had been in my life.”

Therefore, we are ambassadors for Christ, God making his appeal through us. We implore you on behalf of Christ, be reconciled to God. 2 Corinthians 5:20 ESV

At a Sunday morning church service, Jarrett heard a sermon on using your platform to serve Christ. Thinking about the songs he had been writing, the title of The Sobriety Diary ran through his mind.

He went home to finish writing his story. “The tracks were recorded in the same order they were written. As the album progresses you can hear it getting a little lighter. The first half is very dark, those songs were written during the detox time when I was scared and confused.

Then when you get to ‘Hallelujah High’ it’s not as dark, you’re coming out of the first part of the album.”

Jarrett set his album release date to the one year anniversary of being sober. “It was my way of closing the book on that part of my life. I had to get it out there for myself and in hopes there was somebody out there that may gain something from it. To be honest, I did not want to write those songs,” admits Jarrett, “Like ‘Ain’t Through Working On Me Yet’, I was miserable writing that song, but I had to get through it. When we got to the studio I was nervous. I didn’t want to try too hard to make it perfect because it would take the feeling away from it.”

When Jarrett first sang “My Jesus” at a bar, you could hear a pin drop. It was a song God had him use for that time in his life for himself and others he did not know.

“There was a lady who came up to me afterwards and introduced herself. She had been a few months sober and was on the verge of relapsing that day in that bar I was playing. When I played ‘My Jesus’ that gave her the strength. That was a way God can use music to touch people. God used my pain to touch somebody else’s life who was on the verge on going back into addiction,” says Jarrett

For this reason he will always leave one song spot at a writers round for a deeper song from the heart.

Therefore encourage one another and build one another up, just as you are doing. 1 Thessalonians 5:11 ESV

Jarrett will write songs of different styles with other artists. His several co-writing sessions a week are paying off with ten independent cuts released on iTunes by artists he writes with and many more releasing this year. Writing and making connections is leading Jarrett to achieving his goals. “I’m very excited about this year. My goal is to get a major label cut or a publishing deal. You have to find people that believe in you, people you trust and you have to help people out. That’s what I love about my friend group, the people I write with and the artists I write for.”

Jarrett stands by finding people you believe in and they believe in you. His years spent in Nashville haven’t all be easy, but have been worth the risk. “I didn’t want to be 70 years old and look back on my life and wonder what would have been. Now I know I gave it a shot, not matter how it pans out,” says Jarrett.

He believes dreams are hard work and supposed to scare you. “There was a long time I didn’t step up and play my music out. I just wanted to write, I didn’t want to be on stage. Now after the last year of being on stage so much, it’s my happy place. Once you do it you will eventually start seeing some rewards from it,” says Jarrett.

He advises others to stay true to who they are musically, but be willing to give and take in the songs you write. “There’s certain songs that come straight from the heart, then there’s songs you write that may not be about you. Follow your heart, stick to your guns, but remember it’s a give and take town.

I think having a little faith goes a long way.”