Josh Gallagher has been leaving us hints about his new album and I’ve been putting the pieces together for you. This is what I know…

He wants to leave us wanting more

Josh announced he will be releasing two EPs this year instead of one big album. Fans will get six new tunes on his self-titled EP on March 15 then more on a second EP titled Boots Like Mine this fall.

“These are songs people have heard if they come see us live, I’ve been playing a couple of the songs for about two years, but no one could get them until now. They will be able to download it, learn the words and sing it louder than I can,” says Josh.

If you follow Josh on social media, you can see his love for his wife Lindsey. The two moved from Pennsylvania to Nashville and have made a home for themselves. From getting married to buying a new house, Josh puts their story into his song “Look At Me Now”. He told us all about it in a Facebook Live and played an acoustic version for the love birds in us all. (Skip to 7 minutes in if you want to hear it right away!)

He sings, “Look at me now, thinking bout thirty year payments on a piece of ground, three beds, two baths and a wrap around. Funny how, I traded hell raisin’ for Saturdays on the couch and Sundays in a tucked in button down. Yeah love walked up when I wadn’t even lookin’ and I bought her a round, look at me now.”

Josh has been teasing his fans with 30 second video clips of the songs to be released on the first EP. His debut single “How Bout You?” will be among these songs. The single written with Mark Addison Chandler and Will DuVall, hit number one on CMT’s 12 pack countdown.

“I Drink Beer” will be a song sure to raise a rowdy crowd. (Skip to 19:30 of his Facebook Live video above to hear an acoustic version)

“I’ll just tell you this, it’s a gut-wrencher,” said Josh.

Josh has co-written every song on the EP. For the past several years he has been perfecting each song. “It’s about taking your time and making sure you have the right songs for the right project with direction. If you have direction you can sit down with your songwriters and say this is what I need,” says Josh.

Produced with Chad Carlson, they mapped out the songs from start to finish to give the listener the best experience. “There will be songs you can tell are definitely a Josh Gallagher song then others you won’t see coming. If song writing can be a theme, that’s what this record is. I took my time with these songs and worked with my co-writers to make sure every line, syllable and phrasing, lift and melody was perfect to a T,” says Josh.

“I was sitting in the studio while we were recording and I was getting chills about every song. It’s music people haven’t heard before and I’m excited for them to finally hear it because I’ve been writing and working on the record the past two years,” said Josh.

Josh will be opening for Cole Swindell on March 13 in Johnstown, PA. He tells fans to visit his merch booth for a special meet and greet before the show along with new merch to buy including hard copies of the new EP two days before it is released to everyone else on digital platforms! He will be playing his new songs, so it will be a show you won’t want to miss if you are in PA. 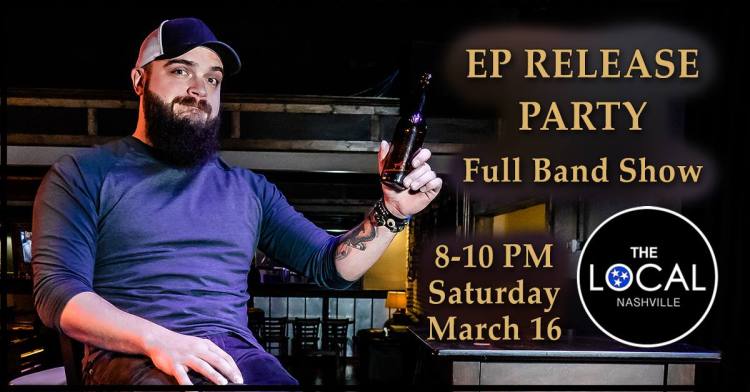 His EP release party will be on March 16 at The Local in Nashville. Josh will be performing during CMA week throughout Nashville and plans to travel to his PA fans then make his way down the east coast. This will be music you have to have all year long! Stay tuned to farmgirlwithcurls.com for more on Josh’s new music and exclusive interviews during CMA week!