Sweden Country Music Artist, Hicks, stays true to his roots and doesn’t let the haters dig them up. If he had listened to all the ‘experts’ who told him, “You’re too old, don’t write country songs, radio will never play your songs, there’s no audience for that, sure you can sing and your songs are great but it will never work, quit… don’t go there… are you crazy?” Then he would have never got fans from all corners of the world and:

Good thing Hicks didn’t listen to anyone but himself!

A. “As long as I can remember, it’s always been music. Ma told me when I was two years old I stood in my diapers and I had my grandpa’s big shoehorn and they played country music. I would play on that shoehorn and they thought, there’s going to be an artist, and they were right. It’s more of a calling or way of being for me. It’s always been there as long as I can remember. I grew up with parents who listened to country music and it isn’t that big in Sweden. I fell in love with country music pretty early and is what’s closest to my heart.” 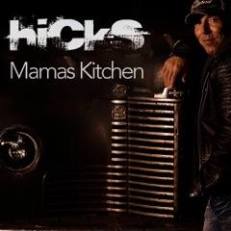 A. “My Ma used to play the accordion and the piano. She always wanted me to follow my heart and the desire for what I want to do with my life, so there’s never been a problem with me pursuing an artist career because my parents always wanted for me to do what I love. I started out in a rock band because country music in Sweden isn’t that big and my friend’s didn’t want to play country songs, they thought it was crazy. I love Rock and Roll as well, so I didn’t have a problem with it, but when I started writing music people thought there was a country vibe and edge. They couldn’t pinpoint it, but there was a country feel in it even though it was a rock song.

I wrote for other artists around the world, but also wrote country songs and just put them in a drawer because I didn’t know what to do with it. That took me to Nashville and met with the manager and producer who worked with all the greats, Reba, Brooks and Dunn, Alan Jackson. I played my songs for him in hopes he could help me find artists to pitch them to. He said, ‘No, we’re not going to pitch those songs’ and I first thought, ‘are they that bad?’ He said, “No, they’re not bad, you’re going to do them yourself. You have a sound that no body has, it’s time for you to step up and be an artist again’ I thought I was done with being an artist because I had been a songwriter for so long. I thought about it and decided, yes, I am going to go for it. So he told me to go back to Sweden, record songs there and promised me they will do well, and he was right!”

Q. You say in your bio many people doubted in you and told you not to pursue your music career. Can you tell me how you decided to not listen to them and only listen to yourself? How do you deal with obstacles and setbacks in life and how your music plays a role?

A. “Since I’m not 20 anymore, the first thing people told me was I’m too old to be an artist, I was crazy for wanting to do country music and it will never work. I used that as fuel because a lot of people listen to those so-called experts and people in the music industry and think when they say something they’re right and they’re not. They just have an idea of how they want things to be and I didn’t agree with them. They can think what they want, but I’m going to do it anyways because this is who I am and what I love. When I decided I was going to see how far I could take it, I just came home and everything fell into place. It’s opened up and taken a life of its own and that has proved to me I’m doing something that’s right. When we follow our dreams I think the Universe, God or whatever lines up the help to push us forward. It’s not that I don’t struggle, but I feel somebody’s driving and I’m in the back seat.”

Q. I share farming and the country as a way of life on my site. Can you tell me more about your musical inspirations about country and life in your song “Hayride”?

A. “The inspiration for ‘Hayride’ is I wanted to write a fun, up tempo, boots tapping, beer drinking, sing-a-long song. I came up with the title, thought it was cool and started to play around with it. The chorus came and I sang ‘Hay Hay Hayride’, that’s a cool chorus. I played it for a friend of mine and he thought it was great. We started to write the song and were laughing the whole time. It took us ten minutes to write the song and an hour and a half later we recorded it. I hope you can hear in the song that we were having so much fun writing it and recording it because that’s what it’s all about for me.”

A. “Don’t listen to the haters, especially these days on social media there are a lot of haters. Even if they are so-called professionals, if it is your dream, go for it and play your songs for people you trust and not just the people who like who you are, but people who are willing to offer some valid criticism to your songs. To follow that, be true to yourself and who you are because it’s so great when we follow our dream. It doesn’t matter what happens because as long as we are following the dream we are doing what we are meant to do, life gets a lot easier and a lot more fun.”

A. “This ride I’m on is such a dream come true on so many levels. I’m living my dream and am so blessed to get the help from God I’m getting. My first gig I did as a country artist was for 18,000 people at a big country festival. I thought they were crazy. Do they know who I am? How did they find me? When we on stage we saw all the people throw their hands up in the air and scream. Wow, I have fans here! That was amazing. When we played the songs we had released they sang along to every song and it was a big party. That was the grace of God for me as a country artist and it couldn’t have been any better. We had to play so many encores, we ran out of songs.

Then a year after I won Best European Country Artist from the British CMA and that was amazing as well. I’ve been invited by CMA to play at CMA fest, that was mind blowing. CMA knows who I am, a guy from Sweden, and the biggest organization in country music has invited me to come to Nashville and play at the biggest country music festival in the world! I am on the ride of my life. I won at ICoMA Country Music Awards for Best International Country Artist and for Favorite Country Group at IMN Country Music Awards, so I am blessed, really blessed.”

Q. Can you tell me some of your exciting plans for 2015 and some goals you have for your career over the next year?

A. “This year I have plans to go back to Nashville in February to play some shows and do some more song writing. In March I’m going to go on a big tour in the UK, from the South of England to the North of Scotland. I’m really looking forward to that. Then in the summer I’m going to do some shows back in my hometown in the Southern part of Sweden. That’s going to be cool to go back to my hometown and play my own songs. I have plans to finish up the album we are working on, I want to write more songs and take it in a slightly different direction than it is right now. I’m doing a lot of promotion and keeping busy!”

Hicks is nominated for the 2015 Nashville Universe Awards for Entertainer of The Year, Male Vocalist, Songwriter, Song of The Year – Mama’s Kitchen, Video of The Year – Unreachable Dream and the Shooting Star award. Vote for Hicks by creating a free account at http://thenashvilleuniverse.com/page/nashvilleuniverse-awards .

To learn more about Hicks and get information on his music and tour dates visit www.hickscountry.com.