The strum of his guitar and deep southern voice take you there… a place where you are ready to rock, ready to protect and defend what is yours and true. Get ready for the Big Storm of real country music from Adam Warner.

Having grown up in a tractor on his family farm in Illinois, listening to country music during long hours of planting and harvest are what led Adam to dream he too could make music. The road to Nashville was not so short. Starting college for audio engineering led Adam to days of going through the motions and partying. Wanting to get his head on straight, he joined the Marine Corps. “I joined the Marine Corps to serve my country and I figured if anything could get my head on straight it would be the Marine Corps,” says Adam.

The love of music didn’t leave him through his military days and nights. “Even when I was in the Marine Corps I still did music, but I knew once I got out I wanted to go back to college and finish what I started. I looked into different music schools then wound up in Nashville. For what I wanted to do, networking and being around other writers, I felt it was the best location,” tells Adam.

He found a home at Middle Tennessee State University. Making friends and writing better songs, led him to pursue his artist career. “I never wanted to do the artist thing until a few years ago. I was just writing and trying to get people to cut my songs. I started doing the artist route and found on stage I feel most at home anyways,” says Adam. 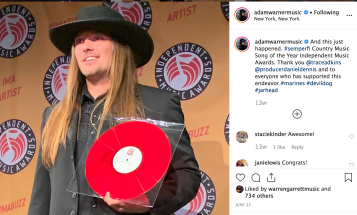 Creating a blend of traditional country and southern rock true to himself, has led Adam to working with successful artists including Trace Adkins. Adam’s recording of “Semper Fi” with Trace’s vocals won Song of the Year at the Independent Music Awards. Adam tells the story of touring with Trace and learning from him as an unforgettable experience:

“I got to tour with Trace on the back half of his tour. On the first night I introduced myself to him and told him how much ‘Semper Fi’ meant to me. I told him, I remember when the song came out during my second deployment in the Marine Corps. To bring things full circle on that song, one of the first guys I met when I moved to Nashville was Kenny Beard. He passed away since, but was in the Air Force, was good friends with Trace and a co-writer on that song.”

“That first night Trace put the song in his set and dedicated it to me. After the show I thanked him, we were sitting on his bus and I was halfway joking with him saying, ‘Hey man you should let me record that song.’ He looked over at me and said ‘Alright.’ I asked if he would sing on it with me, he said yes. We got it recorded and he came to the studio to lay down some vocals. It was a great experience.”

“Trace has been so good to me. To be able to record a song with a hero of yours and learn from a guy like that was an unforgettable experience. He has guided me through this beginning part of being an artist, so I’m very thankful to have him as a part of my journey.”

Welcome to the South…

Adam’s journey has continued with his song “Welcome to the South” used at Nissan Stadium for the Tennessee Titans as a “Welcome” song to the opposing teams. “I wrote that song with two buddies, Trafton Harvey and Quinn Loggins. I had an idea of a hook line, ‘Welcome to the South’. I played sports my whole life and I feel like every football coach says, ‘This is our house, we protect our house, nobody is going to come in here and push us around.’ That was my mentality going into this. In a couple hours we wrote it and it turned out great. It was a lot of fun to shoot the video and be on the field,” tells Adam.

The newly released title track off his upcoming album, Big Storm, is just beginning of what fans are waiting for from Adam. “‘Big Storm’ was a song that legendary songwriter Tim Williams had written, but never got released. He had a brilliant mind with many number one songs you sing along to on the radio. I felt very honored to keep his words alive,” says Adam.

Not only is Adam keeping those words alive on his recorded album, he is singing them live at The Grand Ole Opry. Adam had his Opry debut in June at the closing of CMA Fest. By his side were family, friends and co-writers. “To be on that stage was unexplainable, It’s something you dream about as a country music singer to play at the Grand Ole Opry and Ryman Auditorium. Iconic venues that if you can play at you feel like you’ve done something. Unbelievable artists have stood there before. It was an unforgettable moment and hopefully not the last time,” tells Adam.

These songs included upcoming single “That’s How You Know You’re Living” and “Someone God Can Use” written with Mark Addison Chandler performed by Adam in his Opry set. “I feel blessed to be around creative songwriters, a great producer and management team. Trying to get to that next level working with these guys, I have as good of a shot as anybody because of how talented they are. Surrounding yourself with likeminded people, you can’t go wrong,” says Adam. 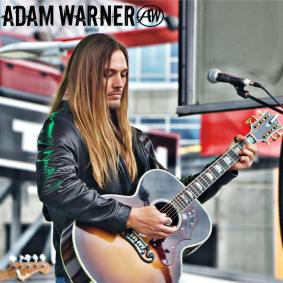 Stick To Your Guns and Sound…

Adam advises anyone believing for a career in music to pray, ask for guidance and wisdom. “Besides that continue to write and be you. One thing that’s helped me is not listening to people telling me I need to sound a way. Once I found my sound I stuck to my guns and I’m not going to change. I’d rather make something I love doing and have a smaller group of people love it than sell out and make music I’m not enjoying,” shares Adam, “I do this because I love it. So stick to your guns, write music and practice to develop your sound and brand. You can’t ever go to the next level if you quit so keep grinding and if it’s meant to be it will happen. Pray, ask for wisdom and you’ll get it.” 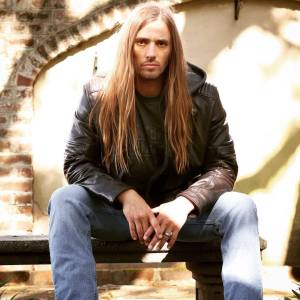 To follow Adam on his journey and be the first to know when his new music is released, follow him on social media and download/stream his music on Apple Music, Amazon Music and Spotify.