Music can have a way of saying all you need to say when you can’t find the words to say it. I love finding a song that says exactly what I’m feeling in that moment. Talking to Texas born musician Jeremy Parsons brought a melody of words into my mind that I could not stop singing. As each new year approaches I think about what I want the rest of my life to be like more and more. We can have a plan only to find it change. Read on to learn of Jeremy’s musical journey, how he lives his songs and is “Makin Things Up” as he goes…

A two hour plane ride can put me in a different land, the land of Texas country music. Born in San Antonio, Jeremy Parsons found himself surrounded by musical influence. “Texas breeds a lot of musicians, inspiration is around every corner and in every small town,” says Jeremy. 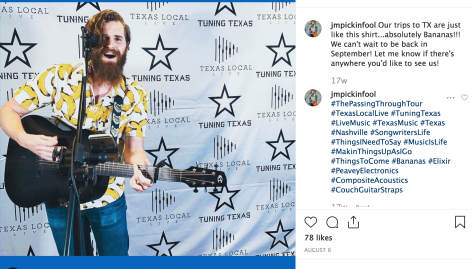 He went to live shows as a kid, but didn’t pick up a guitar until he was 17 years old. By the time he was 18 he was writing his own music. “After a writers’ night I was driving home and thought, ‘Wow, I could do that again, and again and again.’” Finding his own style of music has evolved over the last decade. “You find your own sound by trial and error, when you first start doing it, you emulate someone you’re inspired by. Then you find your voice… for some people it happens more naturally than others,” explains Jeremy.

After touring to many states and countries, Jeremy always looks forward to coming back to his home state. “Texas music is so close to our hearts here. There’s no lack of inspiration and places to play. It’s very supportive in a world that seems very competitive,” says Jeremy, “Down here people appreciate what you say in a song or the way you play the guitar. They are genuine and there’s an appreciation for the person doing the craft. I love coming back to Texas every time.”

From his 2010 record, Doggondest Feelin’ to 2017 record Things I Need To Say, the life and growth Jeremy has experienced is reflected in his music. “It’s been a cool and scary journey as a person who likes to create and is usually in love with what I create. As I learned in life and grew as a person my music evolved into a projection of feelings,” tells Jeremy, “Music was a performance art at first and still is, but now it’s more like a live painting for me. I get to paint my life for people. Between my first and second record I had a lot of life stuff happen.” 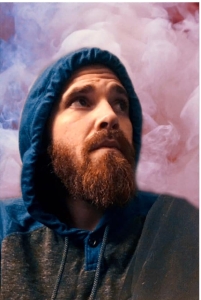 In those life moments, music helps Jeremy find the words he needs to say. “I enjoy music so much because if I go through something my words never make more sense to me than when I’m writing a song for some reason. It’s an outlet that speaks better for me,” explains Jeremy.

If you want to really know Jeremy, just watch his hilarious music video for “Makin’ Things Up As I Go”. “When people want to know what I’m like I just show them that video. I got some friends together and we had a ball shooting the video. We made up parodies of real people who we connected with. We wanted it to be something you don’t have to think about anything while you watch it, you can just enjoy it.” 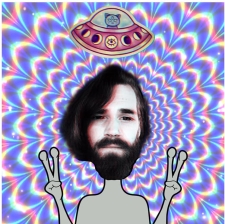 The idea started when Jeremy was making the Things I Need To Say record. The sweet fiddle lick opening the song is nostalgic from the last record and is upbeat. “The rest of the record gets dark at some points. I love sad songs, anything that makes you feel something,” says Jeremy, “We had a lot of choices on singles to go with and wanted something upbeat after ‘Burn This House Down‘ and ‘Why Is The Bluebird Blue‘.

He pins “Makin Things Up As I Go” as an autobiographical song.  “I don’t know what I’m doing. We are at the mercy of the winds of change. I fell in love with the song more and more; the song makes sense as a complete part of this project.”

He describes the essence of the song as a gut feeling and is true to the advice he would give to other artists just starting to find their voice. “People can say you’re no good, but if it feels right when you’re doing it, no one can tell you it’s wrong. Just keep doing it. Make it up, as long as you can go,” he says. “There are a lot of people that get discouraged thinking they aren’t as good as that person, but it doesn’t matter. No one is you. Once you know who you are, stay you and grow as a person and artist. People want to be around someone who’s anchored. Once you figure out who you are, find you’re voice, set your goals. Ride the waves of fate.”

Living life on the road is is not as glamorous as you would think, “Like sleeping in the back of your vehicle, but it’s fun. You don’t know what’s going to happen and it could end up in a song someday. We live for the story,” tells Jeremy. His story will continue to be told in his upcoming 2020 record. “It’s my favorite work of art I’ve ever made and I’m excited to share it with you all.” 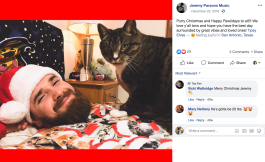 To stay up to date on Jeremy’s journey follow him (and his cute cat) on social media and visit his website jeremyparsonsmusic.com.